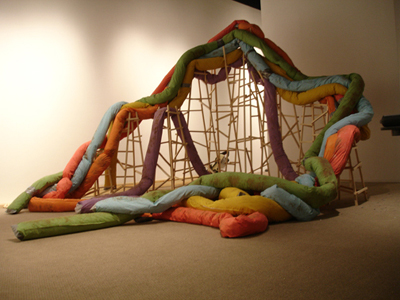 I was born in 1984. It has been a short but exciting life. Sometimes
when I was touring with my post-punk band, Amy and the Angry Inch (now
defunct), I would think back to the painful birth that my mother had
to endure giving birth to a daughter who was bigger than herself. My
own body, from that first day that I entered the world, has been
filled with nothing but heart-shaped Mexican jumping beans and for
that reason I feel fortunate that my best friends Cherry Rabbit, Speed
Racer, Penny the Pug and numerous imaginary artists were there to help
to me as I was growing up and trying to understand the world.

Often plagued by a sense that I am walking through a dream, here but
not really here, I have always been prone to imagination for comfort.
When flying a kite in Chicago with my father and brother I remember
feeling like the kite against the blue sky and like the car door that
I sat next to as we drove away, and like the wind and then I knew that
I could remove myself from any experience.

Soon enough I realized that beautiful cakes had a special aesthetic
significance in my life and that if I focused on the colorful flowers
and sugary sweet memories that they would soon hold then I could also
be walking a tightrope from my bedroom window to the neighbor’s
bedroom window. In that bedroom I could be an entirely different
floaty somebody. From there I could tightrope walk to another room
down the street and watch television with the family there. I never
found a way to enjoy the television dinners that they ate but marveled
at the compartmentalized packaging, wishing that my bed was a huge
aluminum, form-fitted compartment just for my Mexican jumping bean
body. It would hold me still so that when my heart filled my throat I
could shut the shiny aluminum lid and push it back down to where it
should be.